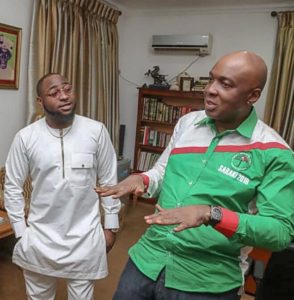 He did so in a comment response to one of his fans when the twitter user asked what his political plans were.

The ‘Dami duro’ singer replied with, “Not now o…Lol, it will come though”

Not now ooo lol it will come tho https://t.co/AzsjaqvRgc

Davido who has been quite outspoken on matters concerning politics in recent times is not new to political affiliations.

His uncle is a Senator and he has been sited with many politicians including the incumbent Governor of Rivers State. He has also been spotted with the Presidential candidate for the People’s Democratic Party (PDP) Atiku Abubakar.

Atiku also pronounced him the king of music in Nigeria almost two weeks.

Recently, he was spotted in photos he and Senate president Bukola Saraki posted on their respective social media handles. Davido seemed to have paid the senator a visit. 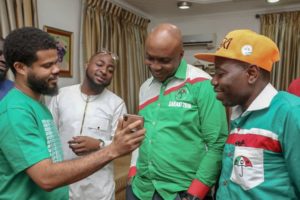 To further clarify the singer’s imminent political ambitions, he captioned his post, “Leaders and a future leader!!!!”

The senate President in his own post commended Davido for his efforts on the “Defend your votes” online campaign.

These posts were made two days prior to the postponement of the Presidential and National House of Assembly elections. This was done by the Independent National Electoral Commission (INEC) 3 AM yesterday on claims of logistics defects.

Davido in his response to the outcome posted: “The last President did the same no cause for alarm. To God be the glory…Delay is not denial.”

The last President did the same no cause for alarm ? To God be the glory .. Delay is not denial pic.twitter.com/3HkwjGP5jM

He has in the past claimed not to be a party person (in support of any particular party). However, his political affiliations have been predominantly PDP based.

We will surely keep you updated on this and more.