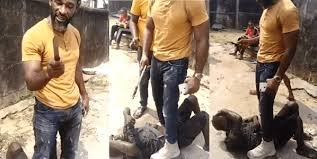 The kick-boxer was seen in a viral video sharing his story involving a cart pusher who allegedly tried breaking into his house at Elekahia Estate in Port Harcourt, River’s State capital.

In the viral video, the kick-boxer, Agamaye shows off the knife the alleged thief tried to use to stab him. He said he caught him red-handed trying to break into his house. He also asked residents of the estate he lives in to stop cart pushers from coming into the neighbourhood.