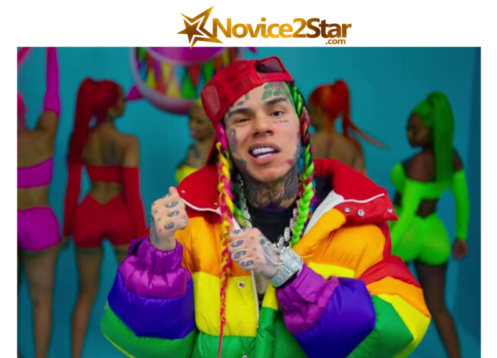 Tekashi 6ix9ine is now the most talked about rapper in the world after being released from prison.

The American rapper spend two years in prison for having a sexual intercourse with a minor. He was sentenced to three years’ probation and 1,000 hours of community service after pleading guilty in 2015 to taking part in making and disseminating a video that showed a 13-year-old girl giving oral sex and making sexual contact with other individuals.

His years in prison was cut short due to concerns that his asthmatic nature will make him prone to contact coronavirus. The rapper was released and had dropped a new material “Gooba” last night. Tekashi 6ix9ine broke a record after having over 2 million people join him in a less than twenty minutes session on IG live.

He has now amassed over 25 million views in 13 hours.

The 6ix9ine situation has taught us some lessons or better put has called our attention to lessons we overlooked.

The Nigerian music industry is only but a subset of the global music industry. The rules are not too different from what is obtainable in the world. Tekashi is only enjoying theories that have been proven in the country that no one paid attention to.

Hip hop industry in Nigeria has literally been cold for some time now. Aside the buzz when MI Abaga dropped ‘You Rappers Should Fix Up Your Live’ in 2017, the Blaqbonez ‘Best Rapper in Africa’ moment and the Naira Marley ‘Am I a Yahoo’ situation, hip hop in Nigeria could be said to have died.

But here are the few lessons we learnt from the Tekashi 6ix9ine situation that could help the Nigerian hip hop industry.

In fact it has happened in Nigeria but not this huge.

Hip pop is a game where everyone claims tough and perfect. In fact nobody wants to be the weaker vessel in the game. You see rappers bragging about their wealths and talent more often than any other genre. This is most definitely what defined rap in the past but the game seems to be changing. Vector accused MI Abaga of being a rat, same as Tekashi but the industry seems to support the weak in the hip pop game. They amass incredible numbers, pulling massive attention even when that shouldn’t be the case.

2. If not for prison there will be no bars. Prison makes hip hop artistes even more famous. (another case study: Naira Marley and EFCC)

Controversy is a tool in the hip pop game, most especially when it is against the feds. Meek Mill received some extra exposure after he went to jail. To be honest, I literally never knew Meek Mill till after he served his jail term. Hip pop is changing! Pity is the new gold, no longer rigidness, toughness and all.

What do you think about my opinion? Please let’s discuss below

5 Lessons Learnt From The Billboard Success Of Nicki Minaj