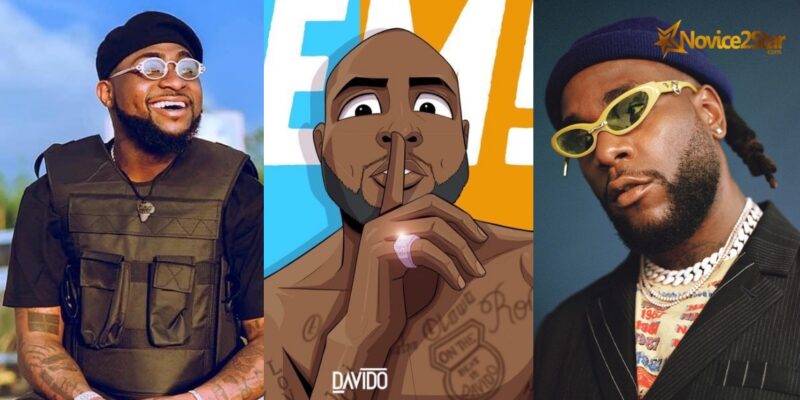 Fans of Burna Boy and Davido seem to take the diss issue more serious than their faves. Few days ago, Davido dropped his much anticipated song, FEM. But Burna Boy seemed to be a step ahead with his WAY TOO BIG song of his Twice As Tall Album.

After the release of FEM, which was later acknowledged as a beef towards the self acclaimed AFRICAN GIANT, fans of Burna Boy have been defending their favourite with everything.

Throughout the night, WAY TOO BIG was among the top trends on Twitter Nigeria and fans of Burna Boy have come out to bash Davido.

Some say it is better for Burna Boy to not give a reply because he is “WAY TOO BIG”.

This has triggered a debate between the songs FEM and WAY TOO BIG.

Even though no names were mentioned, WAY TOO BIG was obviously a song referring to someone. WHO? That is what we have no clue of. The lyrics proves he fired a shot at someone (or some people).

I dey tell you my guy, you know my style
E no be Jazz, them dey sell am for eBay
If you say you get mind and you wanna try
You go go die, iberibe
It’s been a landslide for a long time
But them no wan believe me
All of una combine, shey you wan try
Oya do am, if e easy
Who bad enough? Who do it like me?
Make una phone my cellular (wait)
Your back and your spinal cord e go break
If you carry my weight

The 30BG boss on the other had was direct and straight forward about who he was referring to. In his lyrics, he mentioned ‘Odogwu”, a name Burna Boy addresses himself.

Odogwu means a mighty person in the Igbo language. It was the title of a promotional single by Burna Boy. Burna Boy’s official single which shot him to the limelight was “Like To Party“, a song of his L.I.F.E album.

Davido uses two of Burna Boy’s songs title. And this is one reason why many think it is a diss song aimed at Burna.

Who do you think fired the first shot? And which diss song was the best?