Watch the colourful visuals for “Green Light“ and let us know what you think; 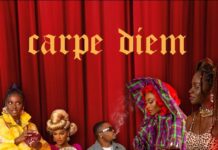