The video of American rapper and music executive, Diddy dancing to “Smile” by Wizkid has gone viral.

Wizkid is already enjoying massive streams on his album four weeks after its release. Diddy in the video below sings and dance to Wizkid’s song “Smile” featuring H.E.R.

‘Wizkid Is An Impact Maker’, He Made Drake And Beyonce More Famous – Twitter Claims 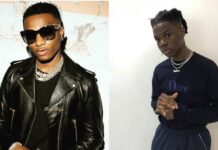