Here is the official video of the new record from BasketMouth tagged “Trouble” featuring Blaqbonez and 2Baba.

BasketMouth who released his debut ‘Yabasi’ album last year is gearing up for his sophomore project tagged ‘Horoscopes’.

So far, he has released two songs off the new project, ‘Your Body‘ featuring Buju and the new ‘Trouble’ featuring Blaqbonez and 2Baba. 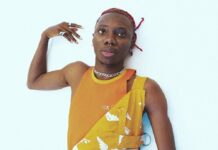