At Obafemi Martins black party at Quilox night club, Wizkid and Dammy Krane got into a fight which led to Dammy Krane bleeding all over his shirt. Most blogs have said Wizkid broke a bottle on Dammy Krane’s head because of the earlier beef between them, which Dammy Krane started, calling out Wizkid, claiming he stole some songs from him. 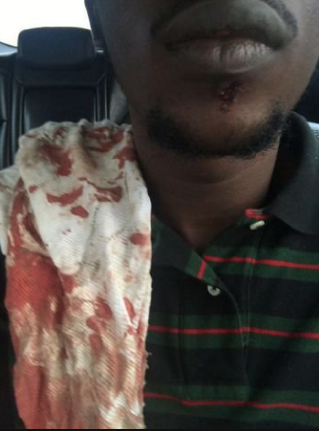 Dammy Krane with blood stains on shirt from Bottle fight

Osi Suave (Beat radio broadcaster) on the other hand took to twitter explaining that Wizkid didn’t break a bottle but actually threw his glass cup at Dammy Krane in the popular nightclub when he was with Obafemi Martins and Timaya. Seems a lot of tempers have been boiling since this year started in the Nigerian music industry and patience has run out from Nigerian artistes.

First it was DonJazzy and Olamide at the Headies now Dammy Krane and Wizkid are having a go at it. Dammy Krane tried to retaliate after the cup hit him but was restrained by some men and bouncers while Wizkid moved away and was also protected by some unknown people. Things later calmed down and Dammy Krane changed his shirt. We hope the bad blood amongst artists can be resolved more maturedly before things start getting out of hand and people start getting hurt for real.