The video of the song ‘One’ released in 2018 by singer Tiwa savage has been restored on YouTube after being previously taken down over copyright infringement claims.

The video became inaccessible in January, and all fingers pointed to Ajibola Olumuyiwa Danladi, aka Danny Young as the culprit. Shortly after the release of the song, he openly claimed in an Instagram post that Tiwa stole some lyrics from his 2009 single “Oju Tiwon”.

Tiwa savage and record label ‘Mavin Records’ totally ignored this claim and showed no sign of reaction even when the video was taken down by the streaming Website due to complaints from a third party (Danny).

On Saturday 2nd March, Tiwa announced on her Instagram that the song has been restored by YouTube as the copyright infringement claim was unfounded – no tangible evidence to back it. 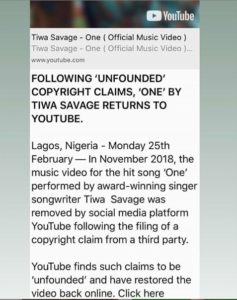 The question is, if there must have been some investigation carried out before this final action was taken by YouTube, wasn’t the same not done before the video was taken down? What changed that decision?

Interesting isn’t it? Kindly leave a comment on this in the section below and don’t forget to share.