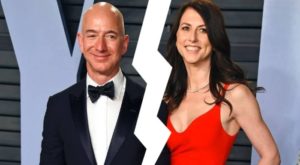 The owner and CEO of top e-commerce company Amazon, Jeffry Bezos recently finalised his divorce with wife of 25 years, MacKenzie Tuttle with a $35 billion settlement.

This is currently the most expensive divorce in history and has made MacKenzie the third richest woman in the world with $35.6 billion as divorce settlement, leaving Jeff with 75% of the Amazon stock.

The awareness of their divorce was first published on the couple’s respective twitter accounts on January 9, 2019 after a trail of turbulence both in their personal lives and in business.

Most people have commended them on the way they’ve handled the divorce so as to maintain stability in parenting their 4 children and mostly, in the business of running a crisis-free and relevant Amazon.

Here’s Jeff and MacKenzie’s twitter posts about finalizing their divorce:

Jeff Bezos remains the World richest man with $100 billion to his name, $4 billion ahead of Bill Gates.

Do good things last forever? Are the people we venerate so much selling us pleasant images to satisfy our desires? Aren’t we humans after all?