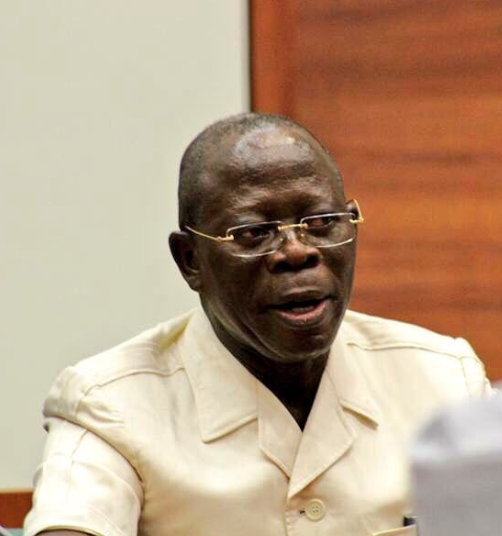 The national chairman of the All Progressives Congress (APC), Comrade Adams Oshiomhole, has said that the party can’t bend its policies in favour of the Edo State Governor, Mr Godwin Obaseki.

The APC screening committee had disqualified Godwin Obaseki from taking part in the governorship primary election in Edo scheduled for June 22, however it cleared Osagie Ize-Iyamu believed to be supported through Oshiomhole for the exercise.

There are now speculations that Obaseki, who is searching for a second tenure, could be defecting to the Peoples Democratic Party (PDP), after he had met with a few PDP governors and had a conversation with PDP presidential aspirant, Alhaji Atiku Abubakar.

Oshiomhole, after a meeting with the chief of staff to President Muhammadu Buhari, Ibrahim Gambari, on Monday, stated he does now not recognize the governor’s move, and that the APC has policies governing it and all people regardless of reputation and status is expected to abide to them.

“I don’t know about exit. What we see from your media, electronic and print, is that he visited a number of PDP governors. We read from electronic and print that those consultations may have to do with his plan and so on. But we are not here to speculate,” he said.

“Our party is not a party of big men. It is governed by rules. Both the small and the big are subjected to those rules. I’m sure you will agree that our president led by example when we conducted the direct primary in the last presidential election. We still went to Eagle Square for affirmation.

“Our duty as the management board of APC is to ensure that we strictly obey the provisions of our constitution, which empowers the National Working Committee to conduct primaries for president, governors, national assembly, and state houses of assembly.”

Since the Edo State governor had a major fall out with Oshiomhole, the state branch of the party has had different factions.

Do you really think the national chairman is acting according to party rules?