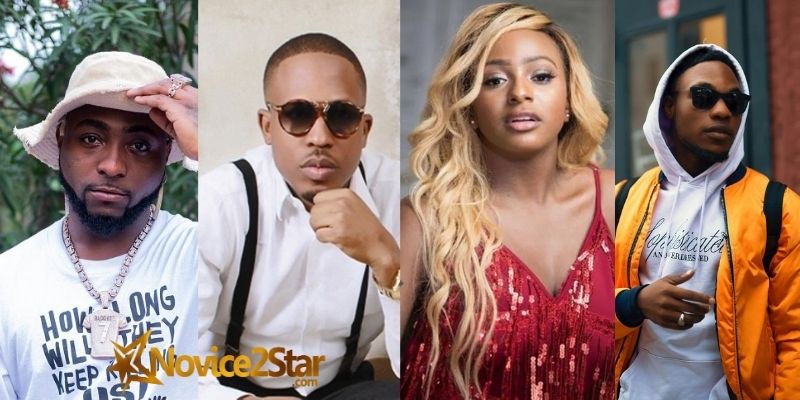 Even though almost all of these artists sing about “grass to grace”, only few of them actually experienced it first hand.

We have seen many numbers of children of politicians or business moguls break into the music scene with the influence or fortune from their families.

Que Peller is a musician and magician signed to Aquila records. He is the younger brother to Shina Peller, an entrepreneur, industrialist and politician.

Shina Peller is the chairman and CEO of Aquila group of companies. Both Brothers are sons of late Professor Moshood Abiola Peller, a Nigerian magician and one of Africa’s most renowned magicians.

His maternal grandfather is the late Chief Antonio Deinde Fernandez, a Nigerian business magnate, diplomat and Permanent Representative of Central African Republic to the United Nations.

B-Red, born Adebayo Adeleke, is a Nigerian singer and songwriter. He is the cousin of Afrobeats star, Davido.

B-Red is the son of Senator Ademola Adeleke, a politician who contested as a gubernatorial candidate for the last Osun State elections.

Chukie Edozien, better known as Lynxxx is a Nigerian hip-hop singer, recording artist and entrepreneur. Lynxxx was the first Nigerian artist to be endorsed by the global brand, Pepsi.

He is the only son of Chief John D. Edozie, a former deputy governor of defunct Bendel State.

John Edozien is the chairman of a couple of companies which includes Jenkyns Consult Nigeria Limited and Mercedes Benz Automobile services Limited. He is also the Chancellor of the Federal University of Agriculture, Abeokuta.

Rotimi Alakija is a Nigerian Disc Jockey with the stage name DJ Xclusive. He was born in England to Nigerian parents.

He is the nephew to Nigeria’s richest woman, Folorunsho Alakija, who is among the owners of top oil blocs in Nigeria.

Naetochukwu Chikwe, known as Naeto C is a Nigerian rapper, Afrobeat singer and Producer. In 2019, he was appointed as Special Assistant on Lagos Liaison to the governor of Imo state.

The rapper, who mainly studied abroad, is the son of Chief Herbert Chikwe and Dr. Mrs. Kema Chikwe.

His father was the former Nigerian Ambassador to Ireland and also a former minister of Aviation.

L.A.X is a Nigerian artist with the birth name, Damilola Afolabi. He started as a rapper in secondary school. He was later signed by Starboy Entertainment in 2013.

He is the son of Billionaire and industrialist, Taiwo Afolabi. He is the founder of SIFAX Group of Companies. An oil and gas dealing firm.

Folarin Falana is a Nigerian rapper known as Falz or Falzthebahdguy who started raping in secondary school after forming a group known as “The School Boys”.

He is a multi talented artist that sings, rap and acts. He is the son of popular Senior Advocate of Nigeria, Femi Falana.

Another DJ on the list is Florence Ifeoluwa Otedola also known as DJ Cuppy or Cuppy. She also a singer and record producer.

She is the daughter of Billionaire oil mogul, Femi Otedola and a granddaughter of Late Sir Michael Otedola, a former governor of Lagos state.

Femi Otedola is the founder of Zenon Petroleum and Gas Ltd, and the owner of a number of other businesses across shipping, real estate and finance. He recently invested in power generation as part of the liberalisation of the sector in Nigeria.

David Adedeji Adeleke, popularly known as Davido is singer and songwriter. He is regarded by many as one of the biggest and most influential in Africa.

He is the youngest of five siblings of Adedeji Adeleke, a billionaire business magnate, founder and president of Adeleke University. He is also the CEO of Pacific Holdings Limited with an estimated net worth of almost a billion dollars.

If you feel we missed out on any other artist, kindly tell us below in the comment section.

Ruger Needs to Stop The Freestyles, He Needs To Prove His Worth (See Why)

Everything We Know About Mavin Record’s New Act, Ayra Starr