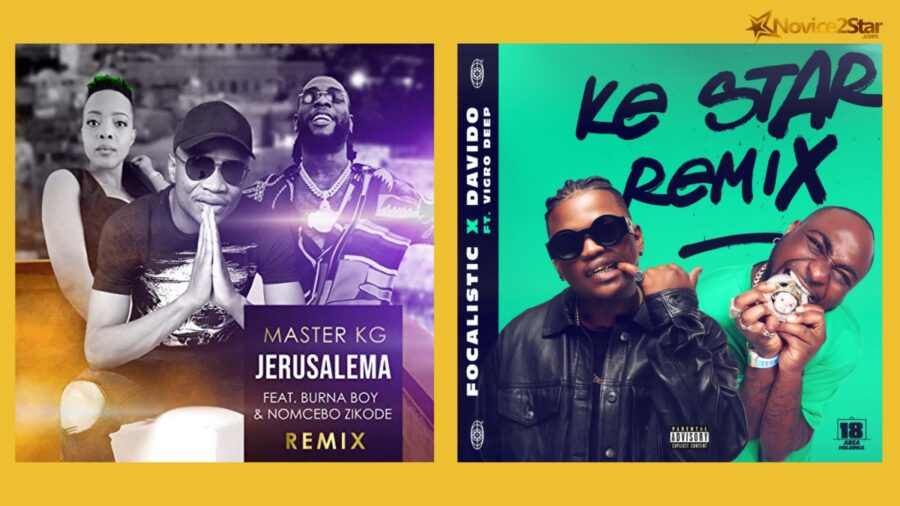 Nigerian and South Africa are always good collaborators when it comes to music, we will be looking at the top 5 collaborations made from this union.

It’s been 2 years since Nigeria and South Africa were at daggers drawn over xenophobic attacks by South Africans targeted at Nigerians and other African nationals.
This created a near-war situation as Nigerians retaliated Massively and waged war on South Africans. This face-off was championed by most Nigerian celebrities with Burna boy being the most vocal about it. He clashed with Rapper AKA.

This affected his show that was supposed to be hosted in South Africa with massive protests from South African entertainers to stop the show for security reasons.

The bad blood lasted for close to 2years and it appears both countries are letting bygones be bygones as we have been seeing some Massive collaborations by these two. That’s the power of entertainment.

The song “Jerusalem” was a smash hit in Nigeria and entire Africa when it came out. The record producer and singer Master KG is known for his really hard and Metallic beats. It was only proper to bring In one of the biggest acts from Nigeria Burna boy who was doing amazingly in the global stage to add spice to an already massive song. The remix paid huge dividends as the song blew even much bigger amassing over 22million views on YouTube.

The South African DJ and record producer “Kabza De Small” took a star-studded lineup on his song “Sponono” off his album “I am the king of Amapiano” but the song didn’t come out as big as that in Nigeria. Despite, having two of The country’s biggest stars on the joint. The song is a very interesting song and the video features animations of the stars.

Nobody does rather uncensored sensual content like Nigeria’s street heavyweight Naira Marley. He talks about his usual vulgarity and sexual escapades on the song. It became an instant hit among the Hoi poloi’s but was banned off radio due to the explicit content and messages. He employs the queen of dance music – Busiswa. She is a regular collaborator of Nigerian artists and a lover of Nigerian sounds. She jumps on the song and gives it the needed spice.

Although the DJ and record and record producer DJ Tarico is not South African, he is signed to George Beke’s label. George Beke is a music executive from South Africa. ‘Yaba Buluku (Remix)’ was released on his label, Geobek Records.
The song has been a success so far. It is very popular on social media such as Tik tok, Instagram and Facebook stories. It has gotten over 1.7 million views on YouTube in just over 2weeks of its release on the platform.

This is arguably the biggest Nigeria/South Africa collaboration since the post Xenophobic attack. It came at a time, the Nigerian music scene is completely dominated by South African Amapiano sound. The song has even traveled across borders to The US where popular American celebrities are seen on social media vining to the song.
Due to the success of the song, fans have clamored for a collaborative album or EP from both artistes as the synergy on the song was superbly appreciated.

With the look of things, it appears music is truly a key unifying factor and this has simmered down the tension between both countries.