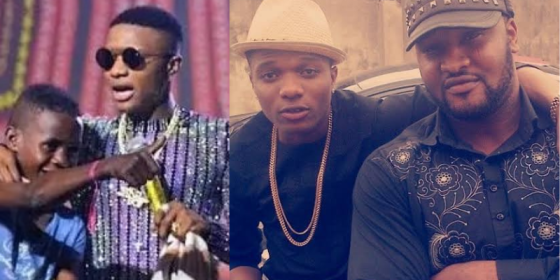 Following the viral video of a young boy who claims Wizkid gave him an audio promise of 10 million naira five years ago, Roy, Wizkid’s bodyguard has countered his claim.

According to the Wizkid’s associate, Wizkid gave the young boy over 10 million naira and even sent him to one of the best schools in Lagos.

The young boy joined Wizkid on stage five years ago where Wizkid promised him 10 million naira and to sign him to Starboy Entertainment.

Recently, a video came up online where the young kid was captured on camera calling out Wizkid for abandoning him.

This caught the attention of Roy wh had this to say…

“Ahmed is an Ingrate, Wizkid gave him more than N10Million and put him in one of the best schools in Lagos (Caleb) also got him and his parents a new apartment and furnished it, but ahmed was busy smoking Igbo up and down and was into g**ng stuffs and that was why he got Expelled from Caleb”