“I was privileged to be among the very first people that took a listen at a record that I call the best song of the last ten years to come out Nigeria.
“AFRICA” starts with the enigmatic opening line: ” evolution rather than revolution, Great Madiba your legacy will live on”; while the youngster yell in the background: ” I want to dance, I want to go Africa.” all accompanied by an electrifying fast-paced production reminiscent of the producer SHIZZI; but be careful its not SHIZZI its Mininim, Tula’s childhood and longtime collaborator that delivered the top-notch production. No wonder he was able to anticipate the A1 flow that would fill this well-paced beat.

Kicking off at a tempo of 125 beats per minute, the first verse sets in as Tula sings of how he would be underrated but your doubts will be cleared off as his flows impeccably touch the beat an win over you. But the youngster would be quick to remind us that hid first love is Africa his motherland and not you.
By now, the groovy beat of Mininim must have compelled you to be on your feet and you will be forced to switch on your dancing mode, unless you are an amputee. 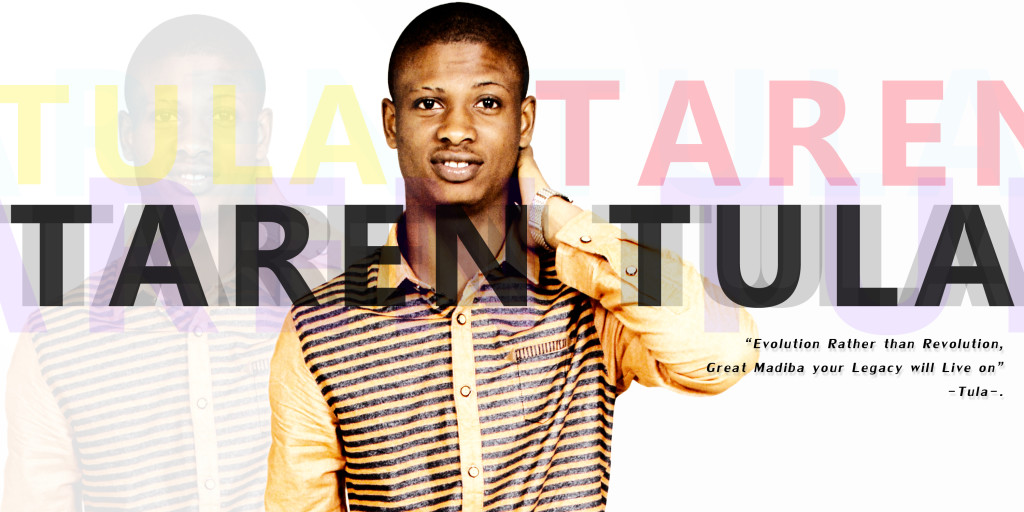 The chorus of the song was inspired by Tula’s childhood memories of while growing up all they wanted to do was to dance and have a good time.

Half way through the song, the youngster would take on a role of an activist reminiscent of BONO the lead singer of the greatest rock band of our time U2; while he denounces the burden of debt repayment of African countries accrued by corrupt past governments, stressing out the case of subsaharan Africa that spends over $14.5 billion annually in debt repayment; and we can all argue that such huge sums can be spent on things like healthcare services that benefit the poor if there was not debt in the first place. The youngster will go on and urge us to take action and put pressure on political leaders to be transparent and tackle corruption while the melodions synth of ” Evolution Rather Than Revolution” echoes throughout the background.

As the song’s coda kicks in Tula sings: ” you want to dance, you need to come Africa” with a voice that will strike the conscience of any well-to-do African living in the diaspora to come back to the motherland and contribute in the building process of a giant continent, while the opulently tip-top production of Mininim comes to an end with the songs underlying theme reflecting on ” Evolution Rather Than Revolution”

According to Tula, the lyrics of “AFRICA” were partially inspired by the reading of Bob Geldof’s biography ( the Irish anti-poverty crusader) and the legacy of Nelson Mandela which Tula extols will live on forever.

Final word; without a doubt, “AFRICA” is definitely a banging masterpiece that is in a league of its own and can stand the competition from anny established musician that will dare to rival it.
I commend Taren Tula for his tip-top pen game and for charming out such a grovy masterpiece as a debut single filled with a deep and conscious message all at a pulsating rhythm.