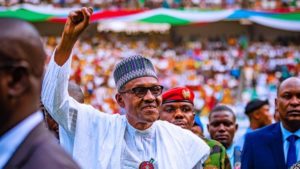 Nigerian president Muhammadu Buhari has been declared winner of the 2019 presidential election by the Independent National Electoral Commission (INEC).

The elections which held on the 23rd February 2019 took three days before the final result was announced.

President Buhari of the All Progressives Party (APC) defeated former vice President Atiku Abubakar of the Peoples Democratic Party (PDP) by a 4 million margin to become the winner. A total of 15,191,847 APC votes was what it took to beat 11,262,978 votes for the PDP.

That Muhammadu Buhari of the APC, having satisfied the requirement of the law and scored the highest number of votes is hereby declared the winner and is returned elected. #NigeriaDecides2019⁠Result pic.twitter.com/oz89PAz1QM

This means another four years in office for the reelected first citizen of the nation.