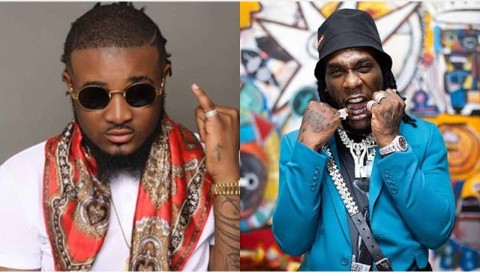 Yesterday after rumours flied by that Ceeza Milli wrote one of Burna Boy’s hit single ‘On the low’. Burna Boy replied to the rumours in a tweet threatening to beat up Ceeza Milli and even claimed to had called him to ask which he Denied. 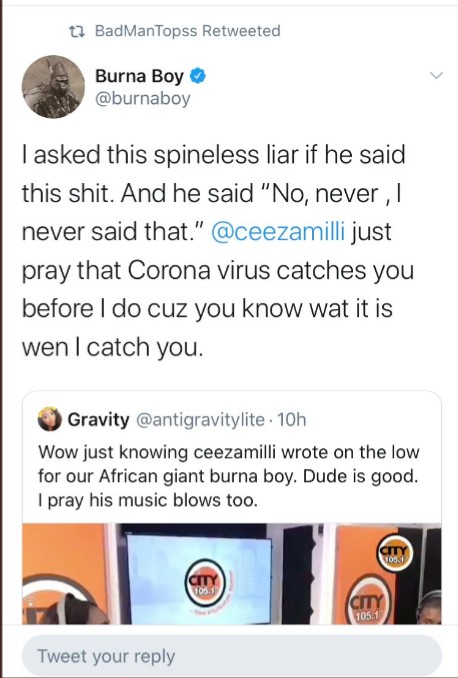 Although, Burna boy apologized and actually admitted he overreacted but went on to say he deserves few slaps regardless. 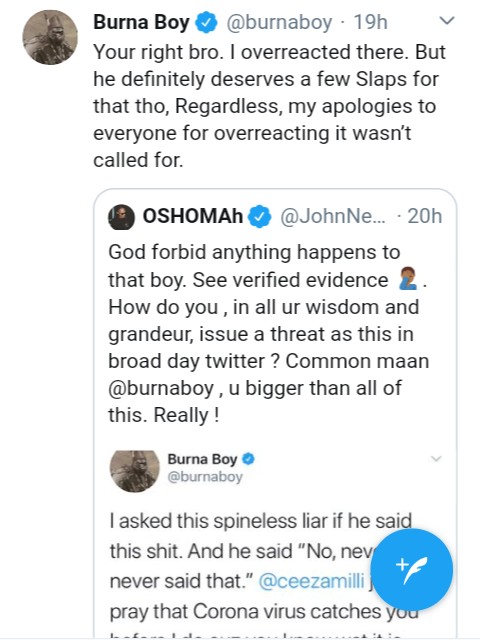 Ceeza Milli has however responded on the issue and still maintained his stand that he actually vibed to the song but he didn’t write it completely. He went ahead to say that he will go to the necessary agencies to report the issue. He addressed a lot in the lengthy posts he made below;

“I have been tagged in some social media posts showing Burna Boy’s tweet about me not working with him to record some songs. First ad foremost, I will like to state that I have the utmost respect and admiration for Burna Boy and it is an incredible feat what he has been able to achieve with his music and I wish him well. As regards songwriting on the record “On The Low” in August 2018, I was invited to a recording session by my label Aristokrat records to work on a project with another label mate to feature Burna boy. That recording camp session lasted about four days.

The way I work, when we vibe in the studio to sound recordings, i’ld typically get a vibe, the artistes I’m working with will then vocalize it and pout it on the record. This is exactly how it played out with “On The Low”. In fact, the sound recording for the song was made by Kel P for another artiste who at that time had not voiced on it. I heard the beat by Kel P and vibed the into of the song on my phone “Kpokpo di kpo ou dey high me like choco o”. We went through this process and recorded the song.

Without a doubt. Burna changed some words in the vibes I laid out for him in the studio that particular day ad there were people in the studio at that time, including my record label bosses. A song that you vibed about 50 to 60 percent of, will you be wrong to rxp[ress that you wrote it? So I am really at a loss for how Burna can claim I didn’t work with him on the song. There is no shame in having songwriters work with you. There are several international artistes that do not write their songs at all. I wonder why it os considered a reproach to acknowledged that you got assistance in creating a piece of work.

I have written songs for other artistes that have gotten critical and commercial acclaim and I have no doubt that God will enable me to do more. It is unfortunate that st the time I worked with him on those songs, I had not gotten sufficiently informed bout documentation for intellectual property. A simple spit sheet will undoubtedly have ended this bac and forth.

Furthermore,  I have had no has a conversation with Burna since the expiration of that camp in August, 2018. I have no reason whatso ever to leverage Burna or his successes as I have no doubt that the passion, persistence, talent, and grace that worked for him, to get to where he is have all been made available to me by God almighty. I have no doubt that I will fulfill destiny.

I am, however, of the opinion that there are civil ways to air grievances without resorting to name-calling or threats to life and physical injury. I will notify the relevant agencies to ensure that as a Nigerian citizen, threats to my life /physical injuries to my person are taken with the seriousness that they deserve. Thank you, Ceezamili”