Human trafficking, prostitution, rape and murder are vices that are prevalent in our society. Although one doesn’t get to see the very depth of this dark, horrific and depraved world as most of it is shrouded in secrecy.

A Nollywood film directed by Kenneth Gyang and produced by a trio made up of Heidi Uys, James Amuta, and Temidayo Abudu, Òlòtūré is a crime drama which exposes the secret, brutal and dangerous underworld of prostitution and human trafficking.

An Ebonylife film acquired by Netflix. Òlòtūré is currently Nigeria’s No 1 on Netflix and No. 10 in the World.

The movie follows the story of an investigative journalist – Òlòtūré played by Sharon Ooja, the eponymous protagonist.

Armed with nothing but passion and bravery Òlòtūré disguises herself as a commercial sex worker and ventures into the world of human trafficking and prostitution in a bid to uncover a prostitution ring but got more than she bargained for.

Sometimes, stay and fight. Other times, run away and come back to fight another day. pic.twitter.com/I29c7QtbSa

What looked like a normal undercover investigation quickly snowballed into her reality. From being an outsider, she’s sucked into the dangers of the life of a sex worker, where is drugged and raped by a politician.

The movie would take you on an emotional roller coaster. With sex scenes, sexual violence and violence against women.

Òlòtūré embodies the dark and bitter life of prostitution in Nigeria.

A high point in the movie was the trip to Europe. Òlòtūré and the other ladies were lodged in a house where they were compelled to participate in an oath-taking ritual which was aimed at enslaving the ladies to their trafficker.

This scene was graphic with blood, pubic hair and nudity.

The cinematography is impressive, it grabs your attention and focuses it on the movie’s theme. The plot is impressive.

The role of Òlòtūré was played well by Sharon Ooja but she didn’t interpret the character like I would have wanted her to. During the movie, I sought answers to questions like why she embarked on the mission and why she was so passionate about the story. The movie ended without giving much of an answer.

Though it seemed like the rape incidence intensified her motivation to pursue the story to its very depths but it wasn’t much of a tangible motivation.

Inspired by a Premium Times investigative journalist Tobore Ovuorie, who risked her life to go undercover to uncover the woes of trafficked women in the nation.

Omoni Oboli’s character (Alero), a pimp who made a promise to get them across the Pacific Ocean to Europe was perfectly interpreted. Omoni Oboli played the role very well. I wouldn’t be out of line to say this movie is one of her finest works.

In Òlòtūré, we meet the good, the bad and the absolutely ruthless. #Oloture is now streaming globally. pic.twitter.com/JJJoTmeRwu

The movie goes beyond trafficking and prostitution. It exposes several areas of corruption and police negligence and sluggishness in the country.

In conclusion, Òlòtūré reveals the reality of millions of girls in the country. The world that many young girls are forced into. 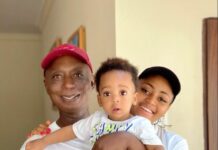 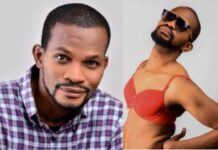 “I Am Not Gay” – Actor, Uche Maduagwu Cries Out After Loosing Movie Roles 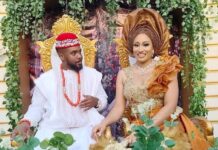