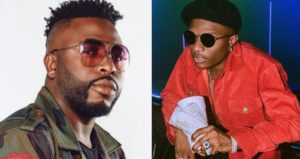 Nigerian singer and producer Samklef has taken to social media to say that he still hasn’t recovered from the effort he put into Wizkid’s first album “Superstar” and fans flooded his space to react.

With a photo of the “Superstar” Album, he tweeted: “Don’t u think I deserve some accolades Nigerians?…I put all my energy in this project am still yet to recover.”

Most of the comments he received from fans suggested that Sam should leave the 8 years old album in the past and make new music while some saw it as a means of creating attention for himself.

Check them out below:

Bros, leave accolades, you’re not the first to produce an amazing and award winning album!
Go get inspired! Focus on getting better! Wetin make don jazzy, shizzi, pheelz, masterkraft, Sarz, con talk ? Leave story bros! I respect you and your work but leave the past in the past.

This guy self, that album is 7 years old for crying out loud ?

Samklef responded to the comments in another tweet with a photo with pidgin writeup that says that fans don’t have issues with other producers posting about their past works, so why are they getting jealous over his?