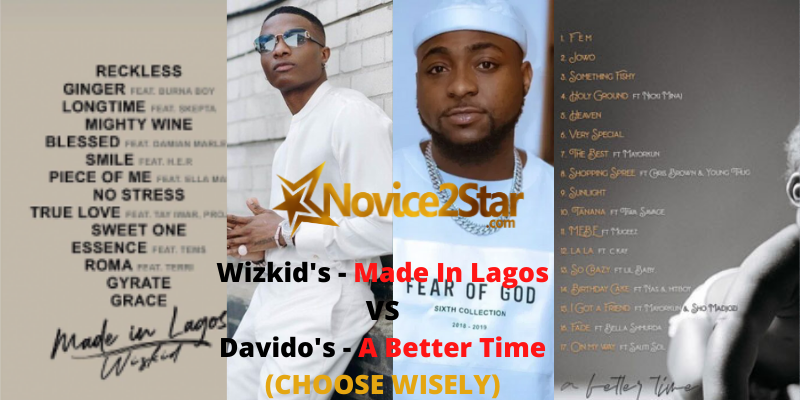 Wizkid’s – Made In Lagos VS Davido’s – A Better Time

Davido finally drops the much anticipated ‘A Better Time‘ album just two weeks after Wizkid officially drops his ‘Made In Lagos‘ album. Now we find out which is a bigger project.

Made In Lagos, is the fourth studio album by Afrobeat singer, Wizkid. This piece of work contains 14 wonderful tunes of different sound with collaborations from both international and local artists.

Wizkid enlist the professionalism of Damian Marley, Ella Mai, H.E.R and Skepta. And back home, he works with Burna Boy, Terri and Tems to create this album.

The album has since amassed over 100 million streams across all platform and has been topping chats in the UK, United States and other foreign countries.

LISTEN TO: Wizkid – “Made In Lagos” [FULL ALBUM]

Davido on the other hand, surprised the world again with another 17 track A Better Time, just like his 2019 album, “A Good Time“.

This album has since gone to top various charts in less that 3 days with millions of streams to its name.

Now let us hear your opinions about both albums. Between both, which would you call the best? And tell us why.