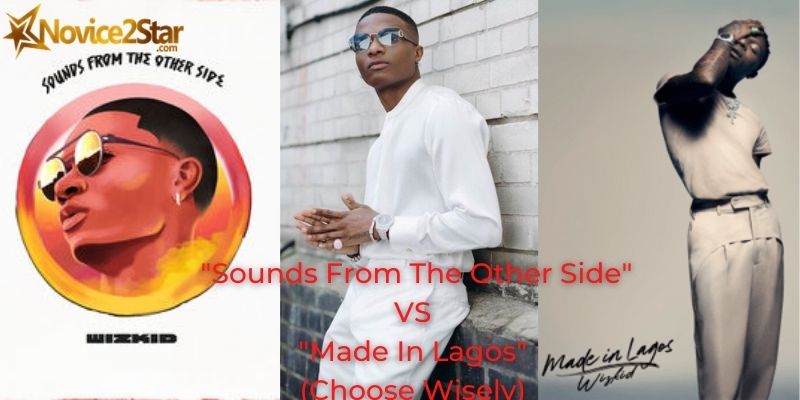 Exactly one month ago today, Wizkid released the much anticipated album “Made In Lagos”. Now let us take you back to his 2017 album, ‘Sounds From The Other Side” and compare both albums. Tell us which is better.

Sounds From The Other Side is the third studio work of the Afrobeats singer and his label debut work. It was released on July 14, 2017.

Although the singer describes this album as an EP, it was recorded between 2014 and 2017. It had collaborations from Drake, Ty Dollar $ign, Trey Songz, Chris Brown and Major Lazer from the foreign scene. From Africa, Efya and Bucie were his support.

Production credit included American producer, DJ Mustard, Del B, Spellz, Sarz and a host of others. The album has amassed hundreds of millions of streams globally and topped various music charts for several months.

The album won the Best R&B/Pop Album category in the 2018 24th South African Music Awards, having also being nominated for Best African Artist Album for the same award and The Headies “Album of the Year” Category in the same year.

“STREAM: Wizkid – Sounds From The Other Side”

One month ago today, Nigerians and the world finally laid hands on the much waited Made In Lagos album by Wizkid. It is the fourth studio album by the singer and second, since his own label.

The album received massive embrace due to the fact that the singe had announced several release dates but disappointed fans. The album also received global acclaim for cohesive themes, mostly for ruling out the flaws in his third album, Sounds From The Other Side.

The album has some of America’s biggest such as NAS, Ella Mai and H.E.R. It also has collaborations from Damian Marley, Tems, Skepta, Terri and Burna Boy. On the production end, it was mainly P2J alongside Juls, Blaqjerzee, Sarz, Kel P and London.

The album quickly amassed over a hundred million streams within the first 10 days and quickly becoming the third most streamed Nigerian album on Spotify. A huge miles tone for an Afrobeat artist.

Within a week, the album broke several African streaming records. It also became the first African album to debut on the Spotify Global Album Chart, and within the top 10. It has also remain at the top of major charts performances all around the world.

“STREAM: Wizkid – Made In Lagos”

Both albums have been a successful body of work but if you are asked which is the best, what would be your choice and why?