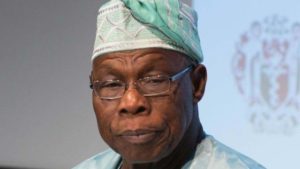 Former president of Nigeria, Chief Olusegun Obasanjo was spotted walking briskly to catch a flight out of Nigeria.

He has been a fervent supporter of his former vice president Atiku Abubakar ahead of the 2019 Presidential election. He has also been quite outspoken against President Muhammadu Buhari.

Buhari was re-elected eventually as President for a second term this past saturday. It has been rumoured that Obasanjo could become a victim of his Anti-curroption campaign.

Could this be the reason for Olesegun’s silence and now what seems to be his escape?

See the video below.

He was later spotted at the Heathrow Airport in London by a Nigerian named Femi Anjorin.

… awhile ago at Heathrow airport T3 with Baba Obasanjo. And I asked him, looking into his eyes “sir, why did you not supported @MBuhari Sai Baba”? Baba Obasanjo look away and say “Nigeria Aa’daa “ ? pic.twitter.com/BDIEXVBb6G

What do you make of this? Kindly drop a comment in the section below and don’t forget to share.